My complaint to the Better Business Bureau resulted in Uhaul immediately offering to cover my final bill (with expenses padded by staff at the instruction of management shown in the photo below). As much as this might seem like a fair and equitable gesture, it's not. Mr. Guilmette was told when he contacted me to call me back with his lawyer on the phone with him. He refused to accomplish that and then tried to appease me by not coming after me for the final rental charge. 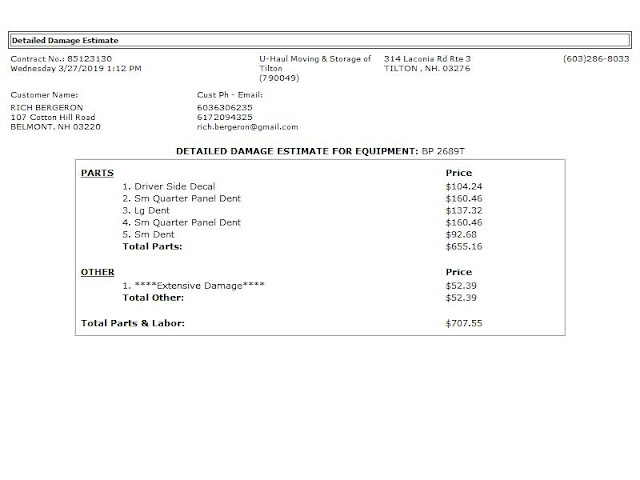 Also within the statement from Uhaul is a pile of blatant and disgusting lies, which I highlighted in bold print below. I don't take the truck off-road, I use boards and tarps in the bed to prevent damage from loading. I have never provided any police reports because the damage to the truck has never been from any collision with any other vehicle (except for the bumper being dented while I was parked one day, and I did not see the dent until UHaul personnel pointed it out). I have always been honest about the damage sustained during my rental periods. Nearly every time the truck was damaged, the dents on the truck happened because of the truck lacking 4-wheel drive and being unable to maneuver effectively in the snow during the winter months, and the damages they claim I did were not any more significant than any careless mover could cause. Also, they act as if I caused some extensive vehicle damage when we are talking about a few dents and dings. I've only ever paid TWO deductible payments over more than 2 years of renting with them. The kicker is they say I can't use the truck for logging and their trucks were not meant for that. I wore company shirts almost every time I came into the office and told employees about how my firewood business was going, and they KNEW what I used the truck for at all times. NOW they want to CRY FOUL? This is not covered by the over $6,000 in insurance premiums I've paid over the years????

NO, NOT TODAY! UHAUL WILL NOT GET AWAY WITH THIS!

Here is the official response from Uhaul, delivered by the BBB:


Thank you for your concern for our customer Mr. Bergeron.

Dan Guilmette, our Executive Assistant for our Los Angeles West Regional Office, followed up on the information Mr. Bergeron provided.  He informed our office he has talked to Mr. Bergeron on two separate occasions but has been unsuccessful in addressing all his concerns.  Mr. Guilmette relayed, the recent Promissory Note Mr. Bergeron incurred in the amount of $1,274.50, will be forgiven for the amount of business he has given us over the years, however, we have chosen not to do any further business with Mr. Bergeron in the future.  The amount of damages he is doing to our equipment due to his off-road travels and improper loading and use of the U-Haul equipment is not covered by Collision Damage Waiver (CDW).  CDW is not a license to do damage to the equipment.  Mr. Bergeron has never provided us with any police reports indicating collision or accident during his rental when he returns our equipment damaged.  U-Haul does not rent equipment for the purposes he is using it for with his logging business.  Mr. Guilmette, unfortunately, has never had the opportunity to explain this information to him.

Our customers are very important to us and we regret to hear of situations that cause problems for them. Thank you for bringing this matter to our attention and allowing us to offer a response.

The fact is, there is NOTHING exclusionary in their insurance agreement about the damage to that truck they are claiming. I also know the company's regular policies and practices, and they changed them on a dime specifically to target ME. If they matched up my truck with any other vehicle in their fleet rented by multiple users instead of just one, for the same amount of time, mine would be the jewel of the fleet. I've seen the damage other people do to the trucks. I've heard the horror stories of people who don't take the insurance and take off to another state or hole up in a Walmart parking lot towing a camper behind them. I've even had to deal with running the truck they gave me for weeks while it needed an oil change badly. I was more concerned about that truck getting maintenance than they were. One employee even told me not to worry about the oil change light at all and actually gave me instructions on how to reset the computer to shut it off!!!!!

Half of the dents on the above list of damages (they are claiming all happened in one week), were already taken care of in other prior vehicle damage reports. They were dents caused by other customers in at least two cases,and one that I already paid for in a previous incident. TOTAL BS!
Posted by Writerfortruth at 8:05 PM

BOX OF LIES: THE TRUTH ABOUT UBOX RENTALS

Uhaul gripe site with key links and info on settlements

UHAUL DISADVANTAGES CUSTOMER AFTER DEATH OF HIS WIFE

ANOTHER CUSTOMER WHO HATES UHAUL NOW

ANOTHER PISSED OFF CUSTOMER

UHAUL: TO USE OR NOT TO USE,NOT EVEN A QUESTION

ARE YOU MOVING? DON'T USE UHAUL

FTC COMPLAINT REGARDING UHAUL COLLUDING WITH BUDGET/AVIS TO FIX PRICES

If You Can Avoid it, Do Not Ever Rent From UHAUL Again

Joe Schoen Rips the Rug Out From Under His Own Father, Pops Wins 1.47 in resulting lawsuit